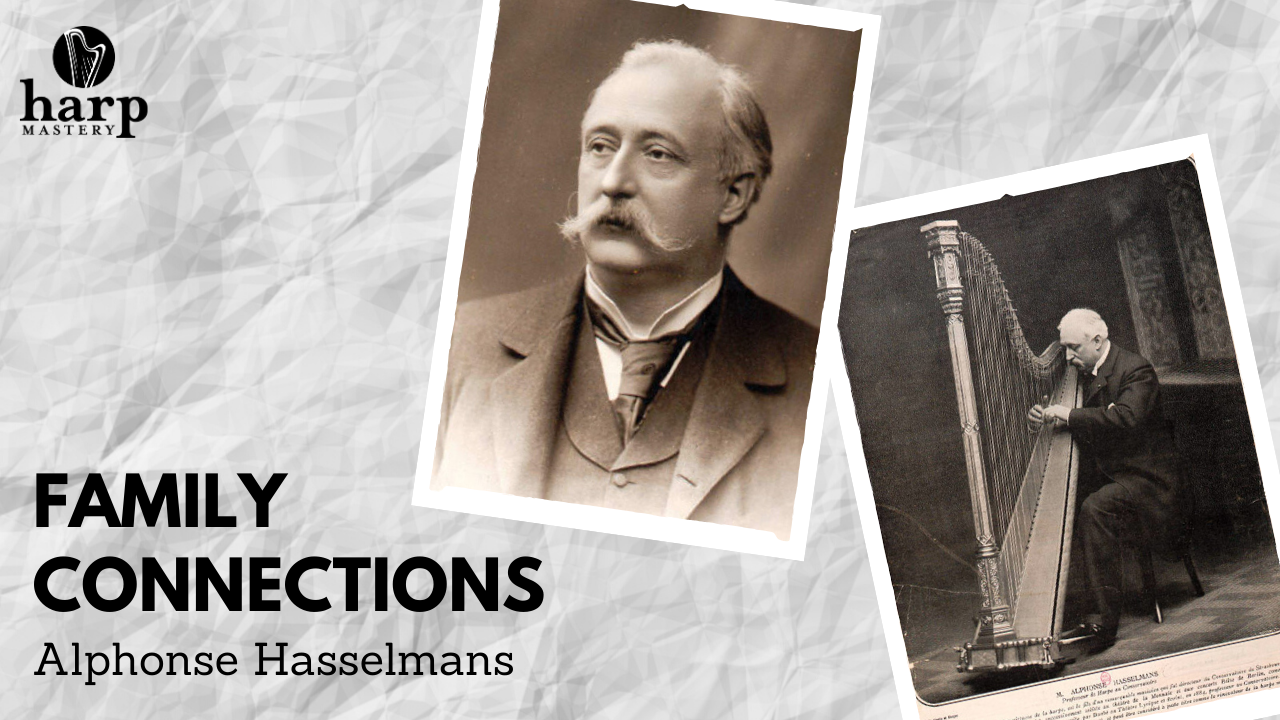 One of the powerful motivators for me in my harp playing and my teaching is the sense of legacy. I love thinking about the harpists who came before me, for whom the music that I know as standard repertoire was new and exciting, who studied with the legendary masters of the instrument. This history inspires me with a feeling of gratitude and an awareness of the responsibility that I carry as a performer and teacher.

Perhaps an even more powerful feeling is my sense of connection to these famous harpists. I have more in common with them than just a love of the harp; we share family connections. I don’t necessarily mean a blood relationship, just a direct connection in the teacher-student harpist tree.

But don’t think that I am special in this regard. You almost certainly share these connections too, perhaps even a connection to the great harpist Alphonse Hasselmans.

Harpist and composer Alphonse Hasselmans was one of the major influencers in the harp world in the late nineteenth century. He was born in Belgium on March 5, 1845, nearly 175 years ago. His father was also a harpist, as well as a violinist and a conductor, and had studied harp with Antoine Prumier in Paris. Alphonse began his harp studies with his father, but later continued his studies with Gottlieb Krüger in Stuttgart and with Ange-Conrad Prumier, son of Antoine Prumier, in Paris.

Hasselmans’s harp career took a dramatic turn after a series of stunning solo concerts in Paris in 1877 brought him to the attention of the public. He subsequently held positions with several notable Paris orchestras, and in 1884 he was appointed professor of harp at the Paris Conservatory, a post he held until his death in 1912.

During his lifetime, Hasselmans composed several dozen works for harp and was a champion of the double-action harp, the pedal harp that has been used nearly exclusively ever since. He was committed to the highest standards in harp playing and wrote an essay on correct harp technique that served as the foundation for what became known as the French harp method.

Your awareness of Hasselmans may be only through his music. Many beginning harpists have enjoyed learning his “Petite Berceuse.” Intermediate harpists often fall in love with the “Trois petites pièces faciles” or the “Feuilles d'automne” with the beautiful “Sérénade mélancolique.” And nearly every pedal harpist aspires to play “La Source.”

But if you thought that was your only connection to Hasselmans, read on.

As professor at the conservatory, he taught many of the harpists we now regard as harp legends: Henriette Renié, Marcel Tournier, Carlos Salzedo and Marcel Grandjany among them. So if you or your teacher or your teacher’s teacher studied with any of these luminaries, you are a direct harp descendant of Alphonse Hasselmans.

Pause just a moment to consider what this might mean for you. Do you feel more connected to the bigger harp community? Perhaps you have sometimes felt intimidated by the music or the virtuosity of other harpists. In fact, you share a common history, a common harp ancestor, a common legacy. The teachings of Hasselmans have been passed to you through generations of harpists. Maybe you are a teacher and are passing those lessons along to the next generation of harpists.

Whatever your harp journey, know that you have great masters in your harp family tree. Nobody could ask for better connections.