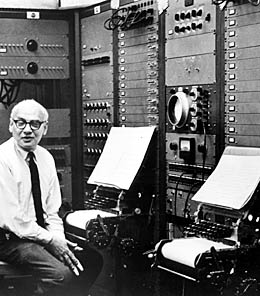 I like digital music and I’m not afraid to say it. Surprised?

If that statement pulls the figurative rug out from under you, you may feel on firmer ground by the time you read to the end…

Electronic music, or digital music, has a history well over a century old. With the development of the telegraph in the 1830’s and the invention of the telephone in the 1870’s, electronic sound transmission was in the forefront of innovation. It was an American Elisha Gray, employed by Western Electric as a telegraph supervisor, who first brought this technology to a “musical instrument.”

In 1874, he developed what he termed a “musical telegraph,” a two-octave keyboard that produced electronic sounds, a very primitive version of the electronic organ which wouldn’t make its debut for another sixty years.

In 1896, American inventor Thaddeus Cahill developed the first music synthesizer, a device that produced what he termed “electrical music” with several different sound effects. In the filing for his patents, Cahill described his own vision for the use of this instrument. Its object was to:

The digital music world today is vast and encompasses everything from random tone generation to carefully sampled and digitized versions of acoustic instrument sounds. The debate rages on over the role of these instruments: are they adding to our musical universe or trying to make “real” instruments (and the musicians who play them) obsolete?

In my opinion, predictions of the death of acoustic music are extremely premature. While I won’t pretend to be able to hear the future of music, I believe that the visions of today’s composers that bring together all the sonic resources at their disposal are ones that, in sum, will add to the development of art music. These composers are less interested in rejecting traditional instruments than in using them in new combinations and unique and truly musical ways.

I will admit however, that my primary personal and daily concern is with my own digits, the ones I use to make my own music every day.

The harp is a very tactile instrument, one where the fingers are in direct control of the sound production, unfiltered through a bow or a key. The physical connection between harp and harpist is a powerful blending of touch, resonance and vibration. And the instrument’s ancient history bodes well for its survival and flourishing in an increasingly digitized world.

I like my harp the way it is, thank you. (I’m still waiting for a teleporter option for moving it from place to place, however, in case any inventors are reading this.)

That being said, I do believe that there is room in music for collaboration and development of all our musical forces, including digitized and digit-full. Here’s just one interesting intersection of the two, a work called “November Morning” by Martin Stimmung. He released two versions of the piece, one completely digitized and the other completely “people-ized,” performed by more than sixty members of the Brandenburg State Orchestra.

This is the orchestral version, but I also recommend a hybrid mix version created by Dave Canto. That video includes composer commentary and video from the orchestra recording session.