Reflections on the Canon 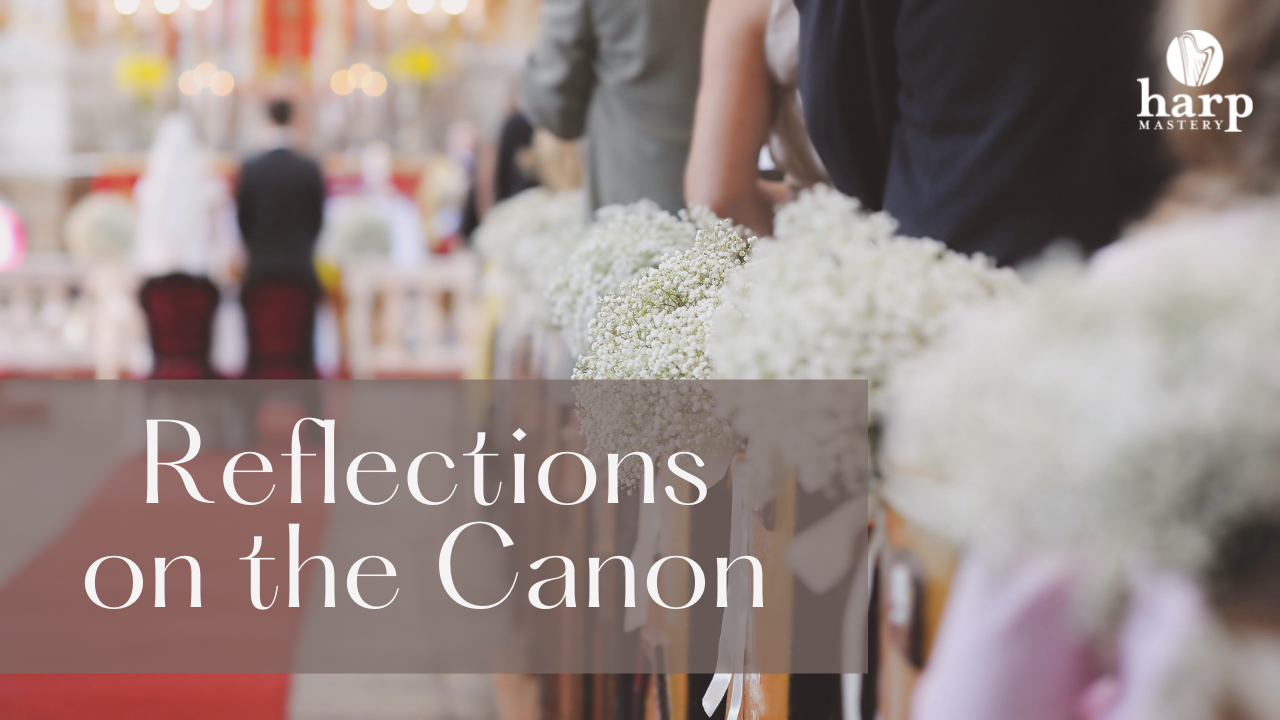 What is it, you ask? It's the famous (some say, infamous) Canon in D by Johann Pachelbel.  Why infamous? Because every gigging harpist has a story like this one...

It wasn’t the bride’s fault that she picked the steamiest day imaginable for her lovely garden wedding. But there I was, under a tent, playing a wedding ceremony in the middle of a heat wave. To top it off, I was playing the Pachelbel Canon. I know people either love the piece or hate it, but I don’t usually mind playing it.

This time, however, I found myself playing the Pachelbel for two sets of grandparents, two sets of parents, six groomsmen and the groom and six bridesmaids and the bride. And it was a long walk up to the front.

It gave me a lot of time to think, and I began to wonder if there was more to the story of Herr Pachelbel. So here are some facts about the man and his most notable composition for you to keep in mind at your next wedding job.

Johann Pachelbel (1652-1706) was well-known and respected in his day as an organist and composer. He was sought after as a teacher, and his many compositions were regarded as the peak of the southern German style.

He was friends with the Bach family. He met them when he was employed in Eisenach, and Pachelbel became close friends with Johann Ambrosius Bach, J.S. Bach’s father. Pachelbel also tutored Johann Christoph Bach, Johann Sebastian’s eldest brother, and was godfather to their sister Johanna Juditha.

Pachelbel, among other composers, was asked to provide music for Johann Christoph’s marriage in 1694. There has been speculation that the Canon was written for this occasion, although the evidence seems to point otherwise.

Pachelbel wrote over 200 works for organ and hundreds of vocal and choral works. The Canon and Gigue in D, scored for three violins and basso continuo, were most likely written as music for a house party or court gathering and are among the few known chamber works of Pachelbel.

Why is the Canon so popular? The piece was featured in the 1980 Academy Award winning movie “Ordinary People.” The film was the first film Robert Redford directed, and it starred Donald Sutherland and Mary Tyler Moore as parents struggling with the death of their son. Pachelbel’s Canon was a central musical theme in the picture.

One of Pachelbel’s two sons, Carl Theodorus, was himself a composer. He emigrated to America, coming to Boston in 1730. Most notably, he was a performer on the concert which is the earliest American concert of which we have any record. The performance was in a tavern in New York on January 21, 1736 at 6:00 pm. The admission fee was four shillings.

Yes, there is a website devoted to all things Canon: pachelbelcanon.com. If you visit, don’t miss the extensive list of popular songs based on or inspired by that famous chord progression!

My own first exposure to the Canon was this Burger King television commercial from 1974. Every time I hear the Pachelbel, it's the Burger King lyrics I hear.

Do you have a Pachelbel story?  Share it in the comments below.

Want to listen to my podcast episode inspired by this post? You can do so by clicking here.