Classical Music and the NFL

One of the most common complaints of musicians and classical music fans alike is about the disparity between professional classical music and professional sports. Whether you look at salaries or ticket sales or audience sizes, classical music feels hopelessly undervalued. We wonder why this timeless art form that represents so much talent and achievement should be almost totally eclipsed in the popular culture.

With the biggest football event of the year coming up, I thought I would share some interesting intersections of sports and music. These are brief glimpses into the lives of three men, all of whom have played professional football, and all of whom share a  love for classical music. 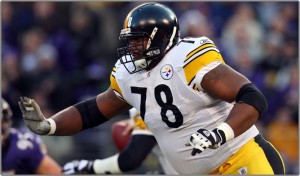 1. Max Starks: Pittsburgh Steelers, #78, Tackle. Height: 6-8 Weight: 345 Age: 31
“I’m sorry, Coach, I won’t fumble again.” No, Max Starks didn’t say this at football practice with the Pittsburgh Steelers, but he did say that to the conductor at a Pittsburgh Symphony Orchestra rehearsal. Max served on the board of the symphony for six years (2006-2013) and has narrated youth concerts for the symphony many times. His love of classical music was fostered in childhood and since joining the Steelers, he has been an active and enthusiastic advocate for live classical music. On his workout soundtrack: “O Fortuna,” from Carmina Burana. Read more about Max.

2. Rob Bironas: Tennessee Titans, #2, Kicker. Height: 6-0   Weight: 210   Age: 34
Moving to Nashville after signing with the Titans in 2005 helped Ron Bironas rediscover his love of music. In 2008, he put that love into action, founding The Rob Bironas Fund, The Fund, with the tag line “Orchestrating Music Education for Music City’s Children,” aims to connect the fundamentals of music with those of everyday life through the importance of teamwork. Important components of Rob’s work are supporting music education in the schools and providing musical instruments for children who otherwise could not afford them. Rob has served on the board of the Nashville Symphony, and continues to work closely with them in their music education projects.  Read more about Rob.

3. Keith Miller: Bass-Baritone, Metropolitan Opera.
Football as a stepping stone to the opera stage? It was for Keith Miller.I met Keith when he was studying at Philadelphia’s Academy of Vocal Arts (AVA), an intensive program for training opera singers. AVA singers are always exceptional, and alumni routinely go on to high-power opera careers. So it was no surprise to hear that Keith had joined the Metropolitan Opera. But Keith had been on his way to a pro football career before opera claimed him. Keith fell in love with opera at the University of Colorado where he played fullback. He was playing pro football and was in training for a workout with the Denver Broncos when he decided to take a singing audition. That changed the entire direction of his life. Read more about Keith.

Who says that classical music is only for the gray hair and glasses crowd?