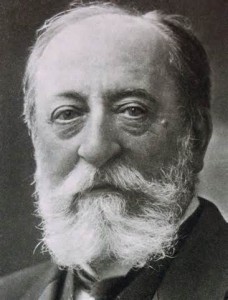 Today I would like to honor the birthday of composer Camille Saint-Saëns, born October 9, 1835.

This piece was a product of the later period of his life, one that was very productive. Saint-Saëns had survived numerous personal emotional upheavals, and by this time was firmly established as a musical reactionary against the music of the young Impressionists like Debussy.

The Fantaisie was composed in March of 1907 on a trip to Italian Riviera for the Eissler sisters: Marianne, a violinist and Clara, a harpist. The sisters were Moravian born and Paris trained musicians who developed a lively performing career. Saint-Saëns had met the sisters some ten years earlier and promised them a duo.

We have these words from Clara about her harp studies, as told to to a contemporary biographer:

When I was ever so small I used to be taken to the concerts at Vienna Conservatoire, where my sisters were studying, and the harp always fascinated me greatly … and when I was seven years old I … became a student of the Conservatoire [in Vienna]. Later on I studied under Hasselmans in Paris. 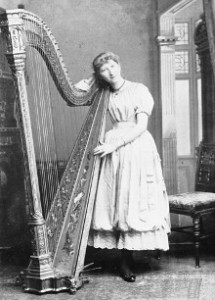 The Eissler sisters played the work for Saint-Saëns on a trip through Paris in May of that year. Saint-Saëns wrote to his publisher, “The Demoiselles Eissler were in transit in Paris and have played my duo for me, which pleased me very much.”

They premiered the work in London that July. The beauty of the piece and its thoroughly romantic style made it an instant favorite with audiences. Marianne wrote to Saint-Saëns, thanking him for the piece:

My sister and I owe one of the biggest successes of our career you. Your famous name gave us a full room with a musical and educated audience, we were inspired in our task, and I would venture to say that we have played your divine works well.