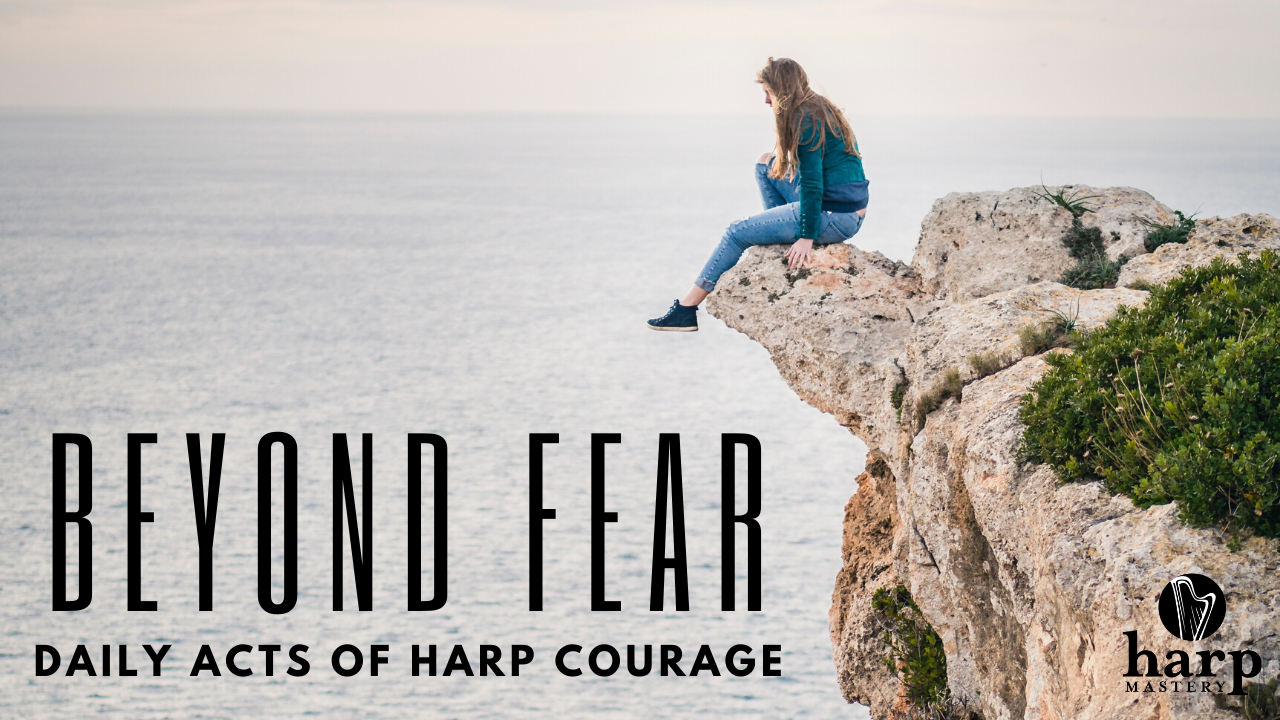 I know many courageous harpists. They aren't necessarily the ones featured on the magazine covers or the YouTube performers with the most likes. They haven’t overcome catastrophic physical disabilities or circumstances. They are simply harpists, people like you and me who have chosen a path that challenges themselves and inspires others.

Most of them wouldn't consider themselves particularly courageous; in fact, some of them are hard pressed to recognize the courage that they bring to their harp playing every day, even when it is pointed out to them. Because many of them would be reluctant to receive public acknowledgement, I will share a few of their remarkable acts of harp courage without using their names.

Harpist A knew she needed help to improve her playing but she was embarrassed to look for a teacher because she would have to admit she had never had a lesson before. She was also afraid that a teacher would reject her as “not good enough.” She is now enjoying playing the harp and seeing progress in a way that she only dreamed about after finally taking the step to start coaching.

Harpist B was always very nervous when she played in front of anyone. At the same time, though, she wanted to make a musical contribution in her community. So despite her fear, she signed up for a local competition and has been awarded a prize two years in a row. She still gets really nervous, but she is learning to play anyway.

Harpist C is very shy about her harp playing. She doesn’t like to play for people and she would be the last person to consider making a video of her playing. But with the help of her teacher, she realized that a video could be helpful for letting her see and hear what others do when she plays. It could be a tool for growth, not just a nerve-wracking experience. Granted, she could barely watch her first video, but she’s beginning to see the benefits. While she expects she will never post anything publicly, she is learning to feel more at ease and less self-conscious about her playing.

It is important to recognize the level of self-mastery that each of these accomplishments represents. None of these harpists aspires to be a professional. Each plays only for personal pleasure. Yet for each of these courageous harpists, they took one brave step that allowed them to go beyond their fear, not to conquer it, but to act in spite of it. I would challenge you to do the same.

In many instances, the biggest motivator to action is a dream, a vision of a future in which you are doing what you currently fear. How would you like to play your music? Do you want to hide behind it or shine through it? Can you imagine yourself honoring your efforts and dreams by taking that one significant step in spite of your fear?

Perhaps you don’t feel ready yet to act in spite of your fear like the harpists mentioned above.  I offer a few suggestions to move your thinking in the right direction. These are baby steps, small actions and ideas that will inspire you daily until you are finally ready to own your courage.

In your practice. Resist the temptation to make excuses, but avoid self-recriminations, blame or other negative thoughts. Your practice develops habits, not only in your music but in your thought patterns too. Each day when you finish your practice, make a note of at least one thing you did well that day.

In your music. Don’t be afraid to release your heart into your music. Play past the mistakes. Push your expression to the limit.

In your playing. Always remember that playing for others is sharing your love of music. It is bringing them a gift, one that only you can give. Be generous and open-hearted.

Inside yourself. Practice with a mindset of growth and discovery. Remind yourself daily of the things you love about music and the harp. Dream about taking your next big step with excitement.

Take a moment to envision a time, not far off, when your harp will be part of your life in the way you want. Then take a deep breath, and as you exhale, feel the energy begin to flow. That’s the very first step to becoming one of the few, the proud, the courageous harpists.