4 Harp Rules You Can Break 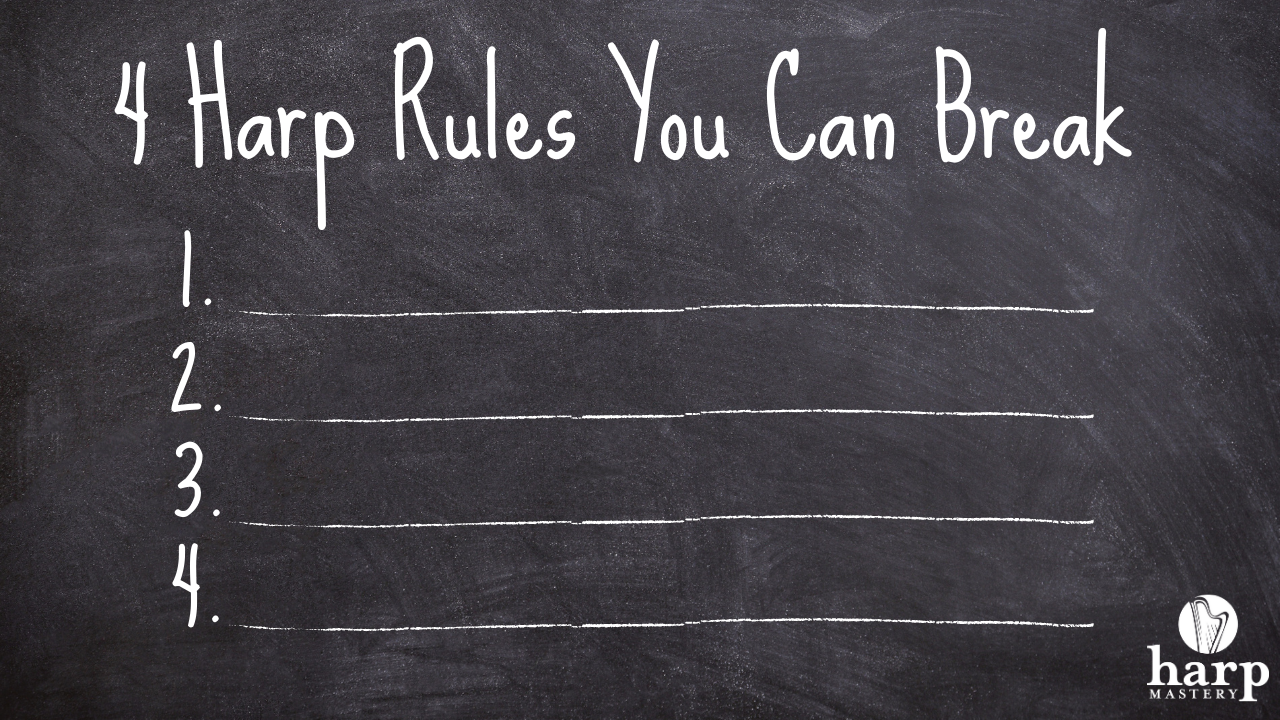 Allow me to start with a disclaimer: If you are a young harpist, an aspiring harpist entering competitions or a virtuoso performer setting the standards for others, don’t read this article. If you’re one of the rest of us, however, read on!

So what is a harpist to do, especially if she doesn’t have access to a teacher who can help her sort through the issues? The answer shouldn’t be too surprising; it’s all about the music.

But when we become so involved in following the rules that we lose sight of the reasoning behind them, we run the risk of losing sight of the music. And when the rules actually prevent us from making music, we know we need to do something different. For instance, if you’re mostly focused on correct technique as you play a piece, you are likely to lose the flow of the melodic line of the music, or be trapped playing at a very slow tempo that isn’t suited to the piece.

I think the happy middle ground lies in being clear about the result you are working for and then making adjustments as necessary to attain that result. Before you start to bristle at the idea of making adjustments, let me assure you that our primary objective is to serve the music with the secondary objective of allowing you to play it well. There is no compromise on the musical result, only in your likelihood of achieving it.

I have discovered that when I show my students how their diligence in observing the rules is hampering their efforts to play a piece well, their resistance to becoming a rule-breaker begins to ease. And once they see the results, they not only shed their resistance totally, but they realize they have discovered a new set of tools for playing their music in a way that satisfies them. Try these rule-breaking ideas below and let me know how they work for you.

This is obviously the most obvious rule for playing any piece. But there are times when the notes on the page don’t make sense for you. The stretches may be too big or the chords may have too many notes. Often the only thing standing between where your piece is now and where you want it to be is a tricky two measure passage. Unless you’re playing a debut recital at Carnegie Hall, you can edit the notes to make the piece playable for you. Leaving out or cutting a few notes from the left hand in one measure so you can play that difficult passage is a smart move if it will allow you to play the piece confidently instead of sweat it out. YOu’re simply creating your own personal “edition” of the piece - a time-honored tradition.

I am a huge proponent of thorough technical development and of being mindful of your technique as you play. Practicing a piece should include practicing using your best technique in that piece. But to truly play the piece, you have to shift your attention to the musical aspect and trust your fingers to do what you have trained them to do. You can’t be vigilant about how your fingers play each note and concentrate on the melodic line at the same time. Keep developing and strengthening your technique by all means, but then let go of the reins and just play.

Rule #4: Make sure your piece is up to tempo.

Metronome markings are helpful. They let you know the composer’s intention for the piece. But what if that tempo isn’t realistic for you right now? Do you have to give up on the piece or keep struggling until you finally make that metronome mark? Those are both options but there is a third choice; finding a tempo that works for the music and for you. Consider the character of the music and decide on the slowest tempo that might convey that character and the fastest tempo too. There’s your tempo range and it’s likely to be fairly large. As long as the piece flows enough to sustain the melody, it’s fast enough.

How do you feel about breaking these rules now?