How to Play Heavenly Harmonics

This post is the first of a two-part series to help you understand harp harmonics, the science behind them and the tips you need to make yours ring beautifully. 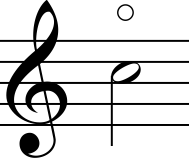 There is no more beautiful sound than a harp harmonic, ringing with a silvery clarity. Philadelphia harpist Edna Phillips was fond of recounting how the famous conductor Stokowski raved about the bell-like tone of her harmonics. But if like most of us, you have ever struggled trying to attain that same sound quality for your harmonics, read on…

While harmonics are part of our repertoire of expressive sounds and tone colors, our understanding of them needs to begin with some science, the science of acoustics. The reason is simple: once we know why harmonics work scientifically, we can begin to see what we need to do to make them work for us.

Imagine plucking a string on your harp, one of the low strings. You can watch the string vibrate, and you can hear the pitch that is produced by that vibration. What you’re actually seeing and hearing though, is the vibration of an infinite number of sections of the string and a sound comprised of an infinite number of pitches. Although most of those pitches are inaudible to us, you may actually be able to hear some of those other pitches within the main sound of the string. Those other pitches are produced by the vibrating sections of the string, and all of them contribute to the composite sound of the string.

The tone produced by the vibrating string at its full length is the pitch we hear as the “note” of the string, and it is called the “fundamental.” Taken together, the fundamental and those other tones are called the “overtone series” or the “harmonic series”. The fundamental and the other tones are often called “partials”, because they represent parts of the overall composite pitch produced. While the overtone series is an infinite series, any partials above the 16th partial are generally considered to be inaudible. Here is a look at the first 16 partials of the overtone series. The notes indicated as quarter notes are only approximate pitches; in other words, they’re not quite what we would call “in tune.”

The overtone series has some interesting implications. For instance, you can see that the first six partials of the series are the notes which form a major triad. From time to time, people have tried to make the case that the acoustics of the overtone series are responsible for the importance of the major triad in Western music. Although this is generally rejected as a “cause and effect” scenario, it is still thought-provoking.

Also, many people credit the relative prominence of particular overtones with the characteristic timbre of an instrument. Certainly, the strength of individual overtones will contribute to the relative “richness” or “brightness” of the sound of a string.

But here’s where our harmonics come in. It is possible to isolate some of the segments of a vibrating string and hear the sounds those segments produce, separate from the fundamental pitch. We harpists do this by touching the string lightly in its exact center, in effect isolating the two vibrating halves of the string, and by playing one half of the string, we hear the pitch we call the “harmonic.”

Our harmonic is technically the second partial of the string, and it sounds one octave higher than the fundamental.  By touching the string in other places, it is possible to hear some of the other partials.

Try playing the usual harmonic on one of the longer strings on your harp. Then using the same harmonic-playing technique, move your hand up the string, trying to play harmonics as you go. You will probably be able to hear at least the next two or three partials on your string.

That’s how harmonics work, but how will this knowledge help us play beautiful harmonics? It points out the single most critical factor in having your harmonic sound like a beautiful bell and not a toneless thump. You must be touching the string in exactly the right place, the exact center. Be aware that this is where you stop the string with your hand or knuckle, not where you play it with your thumb.

So the number one rule for harmonic success is to find the center of the string. In the next post, we will cover the tips and techniques necessary to make your harmonics ring every time.