A Harpist of Firsts: Micheline Kahn 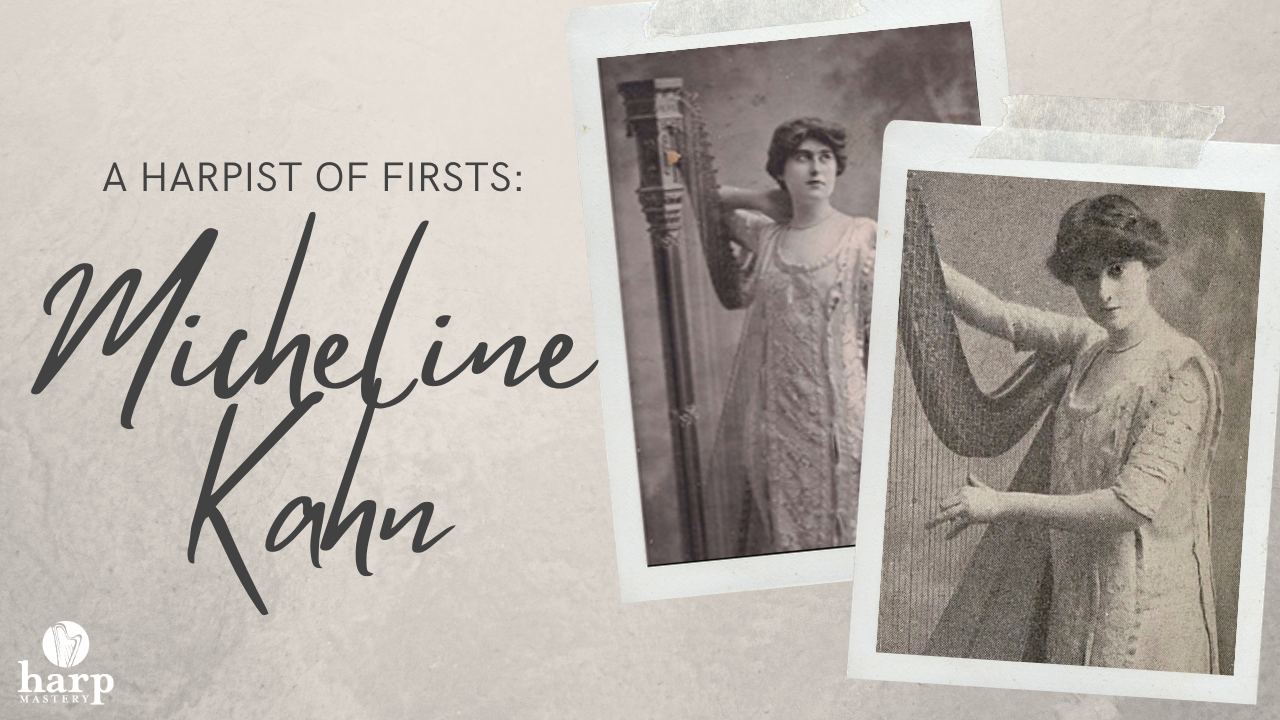 Have you ever wanted to be the first to do something ground-breaking?

Think about what it might have been like for Neil Armstrong to first set foot on the moon. Or to be Charles Lindbergh flying solo across the Atlantic. Or to be the first person, and to date the only person, to win a Nobel prize in two different scientific fields. (That person is Marie Curie, by the way.)

Perhaps it’s a little similar to the experience of seeing something amazing for the first time, like the Grand Canyon or Niagara Falls or the pyramids.

The “first time” marks a change in us or even possibly a change in the world. It closes the door on what used to be and opens a door to new possibilities.

When I think about harp firsts, one of the harpists who comes to mind is Micheline Kahn.

Unless you’re very familiar with the classical harp world, the name Micheline Kahn  (1889 – 1987) might not ring any bells. She studied with Alphonse Hasselmans at the Paris Conservatory, winning first prize there in 1904, when she was only fourteen years old. Her story is impressive just at that, but the “firsts” associated with her are even more noteworthy.

The era when she was studying at the Paris Conservatory was a period of great growth in music and in the harp world in particular. The turn of the twentieth century saw experimentation with the new musical Impressionism of Debussy and Ravel as well as developments in the harp as craftsmen experimented with chromatic harps and larger diatonic harps. Micheline Kahn was right in the middle of it all.

At the Paris Conservatory, she won the first prize performing a composition that had been written expressly for that competition by one of the composers at the Conservatory, Gabriel Fauré. (Fauré became head of the Conservatory the following year.) The piece that she premiered for the competition has since become a staple of the harp literature, Fauré’s Impromptu op. 86. Over a decade later, Fauré dedicated another solo harp work to Kahn, Une châtelaine en sa tour op. 110.

Micheline Kahn’s other notable premieres include the Introduction et allegro for harp, flute, clarinet and strings by Maurice Ravel and André Caplet’s major works for harp, the two Divertissements for harp solo and the Conte fantastique, for harp and string quartet.

While her artistry inspired the vibrant musical world around her, we harpists also thank her for the musical legacy she gave us through her son, composer Jean-Michel Damase. The many works Damase composed for harp are indeed a gift. He credited his deep understanding of the harp and its tonal language to the many hours he spent in childhood listening to his mother practice, teach and perform.

Personally, I find Micheline Kahn’s story inspiring, not just because of the historical significance of her contributions to the harp world, but also because of the possibilities it presents to my mind. I have premiered many works, some of them truly outstanding. Which of those pieces might become pillars of the harp literature? Which “first” might I have been part of that will only become significant when viewed in retrospect? I may never know, but this thought is inspiration enough to keep me performing, experimenting, collaborating and doing my small bit to enlarge the world of the harp.