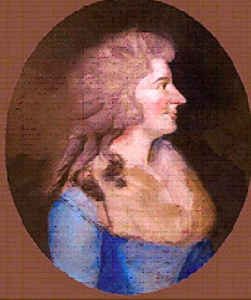 With Valentine’s Day approaching, I found myself reflecting again on how much of our harp music we owe to love and romance. I don’t mean that harp music is “romantic,”  though certainly much of it could be interpreted that way. Rather, there is a substantial portion of harp literature that  was composed by someone who loved a harpist.

The harpist was often a mother (as in Micheline Kahn, the mother of Jean Michel Damase) or a wife (remember Dorette Spohr, wife of Louis Spohr), and I shudder to think what gaps there would be in our repertoire were it not for music being the language of love.

Coincidentally, today February 12 is the birthday of Czech composer Jan Ladislav Dussek (1760-1812).  Perhaps you first encountered Dussek’s music as I did, as a young piano student fumbling through his florid and elegant sonatinas.

Sophia was born in Edinburgh, Scotland to a musical family of Italian descent. She was well known as a soprano soloist, most notably performing as soloist in the Covent Garden premiere of Mozart’s Requiem in 1801.

Sophia and Jan were married in 1792, having met the previous year at a concert in which they both performed. Sophia’s father Domenico Corri had a music publishing company that had experienced major setbacks, but with his new son-in-law Dussek as a partner, this business was revived. Unfortunately, neither the business nor Dussek’s marriage to Sophia were destined for success. When the business went bankrupt in 1799, however, Dussek was forced to leave England, leaving Sophia behind with their daughter Olivia.

Theirs is not a particularly happy story, but there is still another twist.

Dussek, always the businessman, had his works published by various publishers in different countries. This led to some overlaps and inconsistencies in cataloging his works, and somewhere along the way some works were attributed to Dussek which were actually those of his wife Sophia.

More recent research has shown that Sophia herself composed the famous set of six Sonatas often attributed to her husband, along with a large body of other works for the harp, harpsichord and various chamber ensembles.

Her compositions have all the elegance and charm of the most celebrated music of her time, showing the influence of composers like Haydn, with whom she collaborated in performance on several occasions. It is music untouched by the drama of her life, instead revealing the brilliance and clarity of the instrument.

So today, on the anniversary of the birth of her more well-known husband, we can celebrate the harpist who not only inspired his compositions but made her own significant contributions to our beloved instrument.

Here’s to you Sophia Corri Dussek!