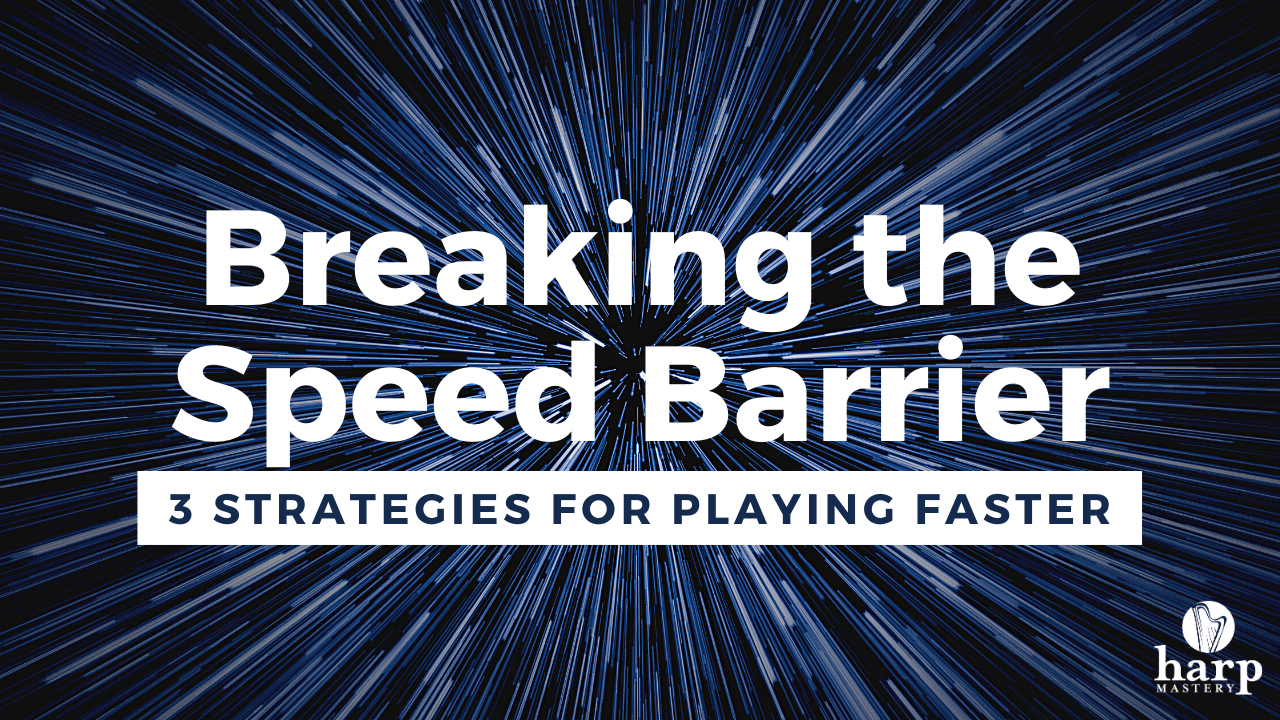 John Bryant, a British journalist and himself a runner, notes that runners had been seriously trying to break the four-minute barrier since 1886, and the mythology around that limit included warnings that the human body would self-destruct at the speed required. Bryant notes, “For years milers had been striving against the clock, but the elusive four minutes had always beaten them. It had become as much a psychological barrier as a physical one. And like an unconquerable mountain, the closer it was approached, the more daunting it seemed.”

In a recent online challenge, I urged the challengers to include developing speed as part of their technique practice plan. While it is important to practice technique slowly with attention to detail, it is also vital to stretch your skills. If you aren’t pushing yourself to play faster, you never will.

Playing things at the same careful speed all the time actually creates a speed barrier. It’s like putting a limiter on your accelerator pedal; you won’t be able to go faster than that top speed, even if you want to. Without having practiced to make yourself play more quickly, your fingers don’t have the agility to make it happen. The simple fact is that if you want to play faster, you have to start playing faster. That’s all.

There are two common obstacles harpists face as they try to play faster. First is the belief that their fingers are incapable of ever playing faster. They think their fingers are too old or stiff or clumsy. Certainly, your fingers may be stiff and you may have physical issues that won’t allow your fingers to race like lightning through your scales and arpeggios. But being able to play faster is nearly always possible with correct practice.

The second obstacle is the fear of making mistakes. It is important to remember that mistakes aren’t necessarily danger signs that you are on the wrong track. More often, they are indicators of growth in progress. Mistakes are inseparable from learning. This quote from physicist Frank Wilczek applies to music as well as it does to science: “If you don't make mistakes, you're not working on hard enough problems. And that's a mistake.”

To help you get started playing faster, I have outlined three 5-day strategies, one to speed up a single skill, one to speed up a difficult passage and one to speed up an entire piece. These aren’t instant cures for slow pieces or fingers, but plans that will work over time.  How much time you will need to see results depends on your goals and what you’re working on. Work through the 5 day plan then repeat as needed.

5-day Speed Up a Skill Plan. Use this with scales, arpeggios or any exercise.

Day 1: Practice the skill at a fairly slow tempo to check for correct form.

Day 3: Just a little bit faster. Stay relaxed and play a little softer if that helps.

Day 4: Even a little faster.Only play the skill three times at this speed; then you’re done.

Day 5: Back to a fairly slow speed, playing calmly and correctly.

5-day Speed Up a Passage Plan. Use this with any problem spot.

Day 1: Find a base tempo where you can play the spot correctly.

Day 4: Play the passage five times at a medium speed.

Day 5: Play the passage once at the medium speed then three times fast.

For a second week, repeat the process but set your base tempo slightly faster.

5-day Speed Up a Piece. Be brave and ignore the mistakes as you speed up.

Day 1: Play the whole piece at a comfortable steady speed. Decide on your “next level” tempo. This should be about 15-20% faster than your comfortable tempo. Also identify a halfway tempo, midway between the two

Day 2: Practice each section of the piece at comfortable, halfway and next level speeds.

Day 3: Divide the piece in half and practice each half at all three speeds.

Day 4: Practice any tricky spots at your fastest tempo then your halfway tempo.

Day 5: Play through the whole piece at your halfway tempo.

Repeat as needed and raise the tempos when you can.

Naturally, when you begin to go faster, your fingers will fumble. This is normal; you are recalibrating their timing and coordination. Perhaps the most difficult part of this process is remaining patient in the face of those fumbles and persistent in your pursuit of a new level of facility.

In the words of Sir Roger Bannister, “The man who can drive himself further once the effort gets painful is the man who will win.”