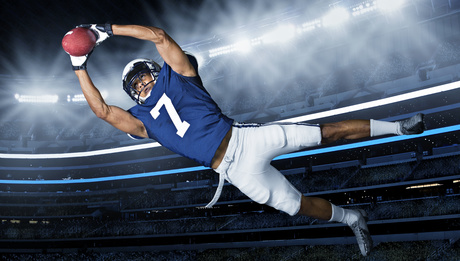 The team is about to lose. Time is running out and in a last desperate attempt to win, the quarterback throws the ball down the field. The receiver barely catches the ball; he is clutching it behind his back. He must hold on to the ball and get across the goal line. He hugs the ball to the back of his legs and leaps. Touchdown. Team wins. Sportscasters replay that “impossible” catch over and over. How did he manage to hold on to the ball?

World class cellist falls off platform during Beethoven Triple concerto. Not only is unhurt but keeps on playing while he retakes his seat. Video goes viral.

How did each of these players manage to not merely survive, but turn a challenging performance situation into a win? What makes them able to perform “in the clutch” when so many others would fall apart? That’s the mastery trait.

But in a performance situation when the moment is what matters, it isn’t the “how” we do it that is most important; it is “what” we do. Our focus is forward-looking, on what comes next. Compare that to our practice focus, much of which is backward-looking: what went wrong and how to fix it.

In performance, it is time to rely on the work we have done in our practice and play the music. And the masters of the craft do exactly that, putting all of their practice in service of the music itself. It’s not an abandoning of everything they have worked on. It’s simply not confusing method with results. Let me explain.

So is having trust in your preparation. When you have practiced correctly AND prepared for performance – two distinctly different ways to practice – then you can let go of concern for the technical details and focus solely on making music. You hear the result you want in your head and that drives your playing. You let go of the details, knowing that you have practiced them thoroughly, and you immerse yourself in the language of the music you are playing. (Notice too, how this could create a profound reduction in performance anxiety.)

The mastery trait also requires a “just do it” mentality, the courage to play past the “rules,” play in spite of how we usually play it. We need the courage to believe that nothing we have done previously is as important as making that musical moment. Surely good technique, solid fingering, correct notes are desirable, if not essential, to playing well. But in the moment of performance, playing with whatever finger will work after you’ve missed the starting note of a run is better than trying to figure out which finger you should be using. This “just play it” attitude can be difficult to develop when we work so hard to perfect things in our practice, but it’s critical to making the “big plays” and coming out with a performance that will make you proud.

The final attribute of the mastery trait is simply experience. The more you play and perform, the more you will train your mind to follow what’s really important and let go of the details. The more your practice correctly, the more solid will be your technical foundation in general and your foundation of knowledge for any single piece that you perform. And over time, you will learn to trust yourself and feel free to make the big plays, to go for the win.