The Mysterious Case of the Extra Accidental 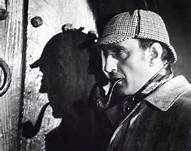 I love detective mysteries, whether the detectives are cerebral like Sherlock Holmes, witty and cultured like Lord Peter Wimsey or more earthy like Jesse Stone. And I love puzzles; crosswords, cryptic crosswords, sudokus, double acrostics, whatever. The harder they are, the better I like them.So when I was asked for help with a musical puzzler recently, I grabbed my deer stalker hat and called for Watson.

My friend, conductor and composer Scott Lavender, had emailed me with a question about the harp markings in the score of Debussy’s Prélude à l’après-midi d’un faune. The pedal markings and the rhythm of the opening two glissandi in the part weren’t clear and he was looking for a harpist’s explanation.

I wasn’t home when I got his email, but I was able to look at the harp part on line. I could easily explain the rhythm. The notation isn’t rhythmic, but it is fairly easy to see the harp plays one (dotted quarter note) beat of glissando going up and one beat of glissando going down. I couldn’t find any discrepancy in the pedal markings. Here is an image of the opening of the printed harp part:

I gave Scott a call, which was not particularly helpful since both of us were in the car trying to discuss the music from memory. We agreed on the rhythmic issue, but I couldn’t understand the difficulty he saw with the accidentals in the glissando.

Until the next morning, when I looked at the score, not the harp part. The harp part as shown in the score clearly indicates an A-sharp and an A-flat in the same glissando. Aha! That was what Scott meant. There was his question: why would the glissando have two different accidentals for the same note? Now to look for the solution to the mystery. Below is an image of the score in Debussy's original manuscript:

Then I found the clue, hidden right in plain sight, just like in “The Purloined Letter.” Between each of the pedal indications in both the score and the harp part were small dashes, which showed the enharmonic equivalencies that Debussy wanted for the glissando. But why have two choices for the A, which could be an A-sharp to sound like a B-flat, or an A-flat to sound like a G-sharp?

The answer lies in the history of the harp. Modern pedal harps are double-action harps, meaning the pedals have two notches, allowing each note to be flat, natural or sharp. The double-action harp was patented in 1810 by Sebastien Erard.

The single-action harp, however, had been in use since 1720. The pedals of the single action harp had only one notch, allowing for only one half-step of adjustment. The harps were commonly tuned in E flat Major (as many lever harps are) to provide the most useful set of sharps and flats. If you ever wondered why so many 19th century harp solos and etudes were written in E-flat, now you know why.