Three Things I Wish I Had Years Ago 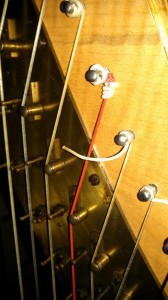 Old School. Back in the day. Whatever you call it, I’m old enough to have been there. And a recent Facebook post by a former student brought home to me some of the important changes that I have seen in the harp world.

Her post was this photo with the comment “Well that’s a new one.” But it’s not; it’s an old one. She had never seen a patched string before. Harp strings were not always as affordable or easily available as they are now. When a string broke, if a harpist didn’t have the correct string it was sometimes possible to tie to pieces of string together and have a decent replacement. The Method for the Harp book even shows you how to tie the knot.

I never did this myself. My teacher had used this technique from time to time but recommended her students to keep a full complement of strings.

But there are some other changes I have seen that have made a huge difference to harpists, and musicians in general. These are the three biggest game-changers in my opinion:

1. Harp Carts. Commercially made harp carts weren’t around until I was a college student. Before then, we carried harps. Teachers taught different two-person harp carrying methods. I remember my grandfather using his engineering expertise to create a couple of different homemade wheeled gizmos that I found very helpful until I bought my first McKay harp cart. What harpist today could imagine living without a cart!

2. YouTube and iTunes. When I was a student, it was very difficult to find recordings of pieces I needed to learn for orchestra. There were record stores (yes, RECORD stores, don’t faint!) but the selection often didn’t include the exact piece I needed. And forget solo harp recordings. There was usually a Zabaleta album in the store, but that was often the entire harp section.

3. Social Media. With the advent of the internet and especially social media, harpists can connect. Being a harpist in a pre-digital world was often a lonely experience. The local harp community was usually very small. What a pleasure it is to get to know harpists from all over the world and interact with them daily, regardless of time and distance. And to be able to nurture so easily friendships formed at camps or conferences.

What innovations have made a difference in your harp life?