What does it mean to be in tune? Part 1: The Science 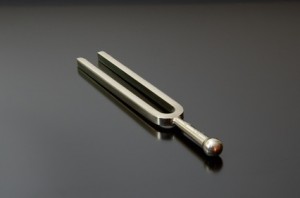 What does it mean to be in tune? You can be in tune with your friend, your spouse, the times or the music of the spheres. We musicians have a particular need to be in tune. We sound best when we are in tune ourselves, and we can play better with others. Here is one of my favorite quotes. It is from the writings of Marcus Aurelius, emperor of Rome from 161 C.E. to 180 C.E. While Marcus Aurelius wasn’t speaking of music, his thought is very apt:

So again, what does it mean to be in tune?

In theory, tuning is an exact science. Sound travels in waves. (Remember those sine waves from trigonometry?) These waves may be shorter or longer, meaning they repeat more or less frequently. The number of times the wave repeats per second (its frequency) is measured in Hertz (Hz) units. One repeat, or one cycle, per second is one Hz. The more cycles per second, the higher the pitch. 440 Hz, or a sound wave with the frequency of 440 cycles per second, produces a particular pitch. It is an A, also called A440.

A440 is the international standard for the A pitched in the second space of the treble clef. An international conference held in London in 1939 first established that standard, which was reaffirmed by the Swiss International Organization for Standardization in 1955 and again in 1975.

Having established the benchmark A440, we can accurately place the other 11 tones in the octave. There have been debates through the centuries, however, about precisely how the notes in a scale should relate to each other. You may be familiar with Bach’s “Well-Tempered Clavier,” for instance. The system of well-temperament uses slightly unequal tunings for some of the intervals, resulting in different tonal colorations for different keys.

The most commonly used system today is the “equal temperament” system. It is certainly the most practical system for us harpists who need to tune every note separately. This system divides the octave into 12 equal semitones, allowing us to play in tune in every key and keeping our enharmonics in tune. It is the way electronic tuners are calibrated.

Tuners are an important tool for any musician. Not only are they invaluable for tuning our instruments quickly and accurately, but they can even help to train our own fine tuning skills. There are two kinds of tuners, electronic quartz tuners and strobe tuners.

What’s the difference, which tuner is right for you, and how to get the best results? It’s all in the next blog post…