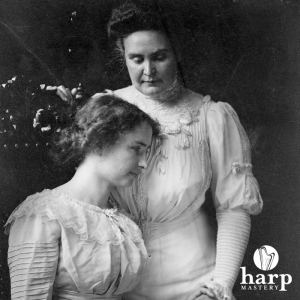 I have a famous name: Anne Sullivan. Not because of my own accomplishments, but because of the woman called the Miracle Worker, the real Anne Sullivan. I don’t believe there is any genealogical connection between the two of us, but I have always been drawn to her story.

Unexpected good has filled the chinks of frustration in my life. But at times melancholy without reason grips me as in a vice [sic]. A word, an odd inflection, the way somebody crosses the street, brings all the past before me with such amazing clearness and completeness, my heart stops beating for a moment. Then everything around me seems as it was so many years ago. Even the ugly frame-buildings are revived. Again I see the unsightly folk who hobbled, cursed, fed and snored like animals. I shiver recalling how I looked upon scenes of vile exposure—the open heart of a derelict is not a pleasant thing. I doubt if life, or eternity for that matter, is long enough to erase the errors and ugly blots scored upon my brain by those dismal years.

After four years, Anne heard there was to be an investigation of the practices at Tewksbury, which were alleged to include cruelty, deviancy and cannibalism, and she used the opportunity to plead not just for better conditions, but to get herself placed into Perkins School for the Blind in Boston.

Anne’s sight had always been poor. When she was seven, she contracted an eye infection which rendered her nearly blind. She had several unsuccessful operations on her eyes during her years at Tewksbury, but it was not until she was 15 years old that an operation at Perkins partially restored her sight. Despite the success of the operation, she suffered visual impairment for the rest of her life.

It was at Perkins that she learned not just the basic schooling she had missed as a child, but an appreciation of reading, a love of Shakespeare and the manual alphabet designed for deaf people. She graduated valedictorian of her class at Perkins in 1886.

In August of that same year, the director of the school recommended her for a position working for the Keller family in Alabama, who had a six year old daughter who had been deaf and blind since 19 months of age.

And you probably know the rest of the story.

That story was full of challenge, dedication and relentless achievement. Over all of it runs a theme of higher purpose. Helen Keller’s own words about her teacher, written in 1955, say it best:

She was never a standard-bearer, except in the sense that she fought against all man-wrought limitation as a crime, and held freedom of mind, conscience and inquiry as sacred.

If you’ve been waiting to see what musical parallel I draw from this, I may be about to disappoint you.

Is this a story about determination to succeed despite misfortune, perceived disability and lack of opportunity? Or is Anne’s story about the growth of the patience, curiosity and persistence needed to be a remarkable teacher? Or perhaps it’s about the singular focus that worked (and continues to work) miracles not just for Helen Keller but for countless others?

Whatever resonates with you in the story of Anne Sullivan, I challenge you to bring that to your work, your music and your relationships this week. Create your own miracles.