Kill Your “Can’t Do” Attitude: How To Defeat Your Limiting Beliefs 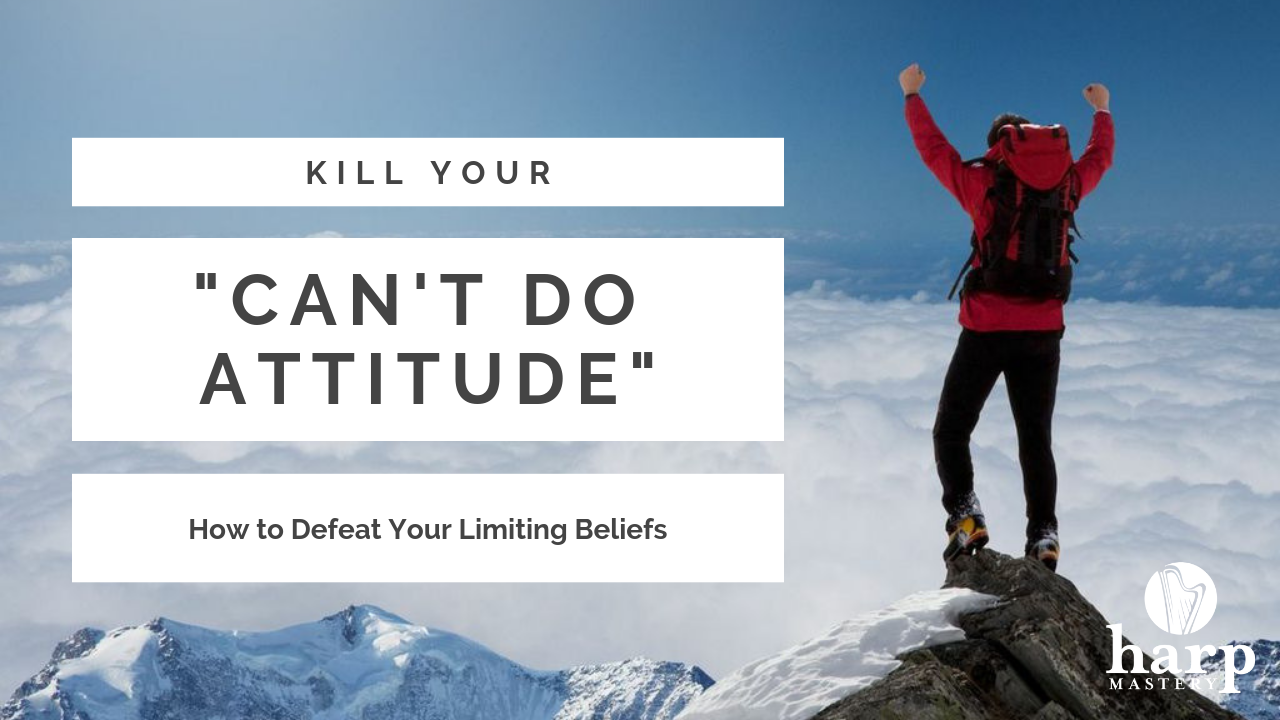 Have you ever been sure that you just can’t do it? Maybe the problem is a passage that you can never play correctly or a tempo you think you can never achieve or a skill level that you fear will always be beyond you.

You tried to stay hopeful. You’ve stayed committed, putting in hours of work, but that end result still eludes you. The question that haunts you is this: “What if I just can’t do it?”

We all have doubts like this from time to time and they serve a purpose. They remind us to reassess our goals, plan our paths and direct our work. They can stir us to action when we get complacent. They can nudge us out of unproductive patterns and lead us to achieve. But we can only move forward if we face the doubts and are prepared to challenge them.

If you’re struggling with this, I’d like to show you a different way of thinking, one that will keep your positive energy flowing and possibly even help you find a way to alleviate your worries. It’s not a miracle cure or a magic system that will make any difficulty go away, and it’s not about trying harder.

It’s about removing the boundaries we place around ourselves, our limiting beliefs that reinforce our fears, simply by questioning them. Sometimes all we have to do is look them in the face.

Who says so? And how could you possibly know?

Colonel Sanders of Kentucky Fried Chicken fame is always pictured as a white haired southern gentleman with an old fashioned bow tie. That may be because his fast food empire wasn’t begun until he was 62 years old.  Ray Kroc never saw a profit from MacDonald’s until he was in his sixties. Grandma Moses didn’t paint until she was in her seventies.

It’s only too late if you never start.

Limiting Belief 2: “I will never be able to…”

How can you be so sure of that?

Breaking the 4 minute mile was thought to be impossible until Roger Bannister did it in 1954. Thomas Edison needed 1000 tries to develop the light bulb. Sir James Dyson made 5,126 failed prototypes before his creating his now famous bagless vacuum cleaner. What if he had stopped at number 5,125?

Maybe not. But is that the only talent/skill/ability you need? Perhaps there is another way around the difficulty.

Hungarian fencer Pál Szekeres won a bronze medal in the team foil event at the 1988 Summer Olympics. Just 3 years later, he was badly injured in a bus accident. His fencing career might have been at an end, but he learned wheelchair fencing, and has won three individual gold medals and three bronze medals as a wheelchair fencer in the Paralympic Games.

Here are some other questions that may help you kill that “can’t do” attitude.